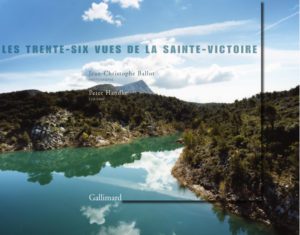 « The thirty-six views of the Sainte Victoire »

Exhibition of photographs by Jean-Christophe Ballot from 3 to 25 August 2019 at the Sainte-Foy Chapel 84220 Beaumettes.

Cézanne painted 44 oils, 43 drawings and watercolours of the Sainte-Victoire. Working on the motif with determination and passion, he brought this mountain into the history of art.

It was all this for Jean-Christophe Ballot, but it was only that: it lacked the meeting, the confrontation instead. It existed only in its representation: the incarnation was still missing.

As part of an artist’s residency set up for him in 2009 by Le Grand Site Sainte-Victoire, Jean-Christophe Ballot walked the mountain in search of a revelation. From his experience, according to the four seasons and echoing the “Thirty-six views of Mount Fuji” engraved by Hokusaï, the artist retains a sequence of thirty-six views of the mountain in forty-six paintings.

With ten views of the quarries of Bibémus, a hollow mountain where Cézanne’s shed is still located, this ensemble is the exhibition “The Four Seasons of the Holy Victory” and the book “The Thirty-six Views of the Holy Victory” by Gallimard. By mixing the images of Jean-Christophe Ballot with texts by Peter Handke, the book forces the unprecedented encounter of two works and two timeless and romantic perspectives on a site inscribed in our natural and cultural heritage.

The mountain, in our Judeo-Christian culture, is the place of asceticism, of effort, of penance in solitude. This spiritual movement is found in many religions: one moves away from the secular world to rise to God.

Jean-Christophe Ballot carries the spiritual values of Buddhism focused on the ephemeral nature of things, those little things that photography knows so well how to capture: a burst of light on a bark in the foreground, or on the top in the distant…

And those of Shintoism oriented towards the full power of nature, greatness and majesty of the mountain.

This work is therefore this poetic meditation of the photographer facing the mountain.

But is this enough to explain the fascination that the mountain exerts on man?

The artist testifies: “I found, while crisscrossing the paths of the Sainte-Victoire, emotions that inhabited me on the road to Santiago de Compostela, in the fall of 1996. It was on Le Chemin that I discovered the joy of travelling the landscape, in an effort of the body, until i got lost in it, dissolved in it.

Then the gaze is carried to the horizon, or the top of the mountain.

Then the gaze reaches this fullness, in this apparent paradox of detachment and communion with the world. It’s a joy.”

The mountain: this unlikely encounter of heaven and earth.